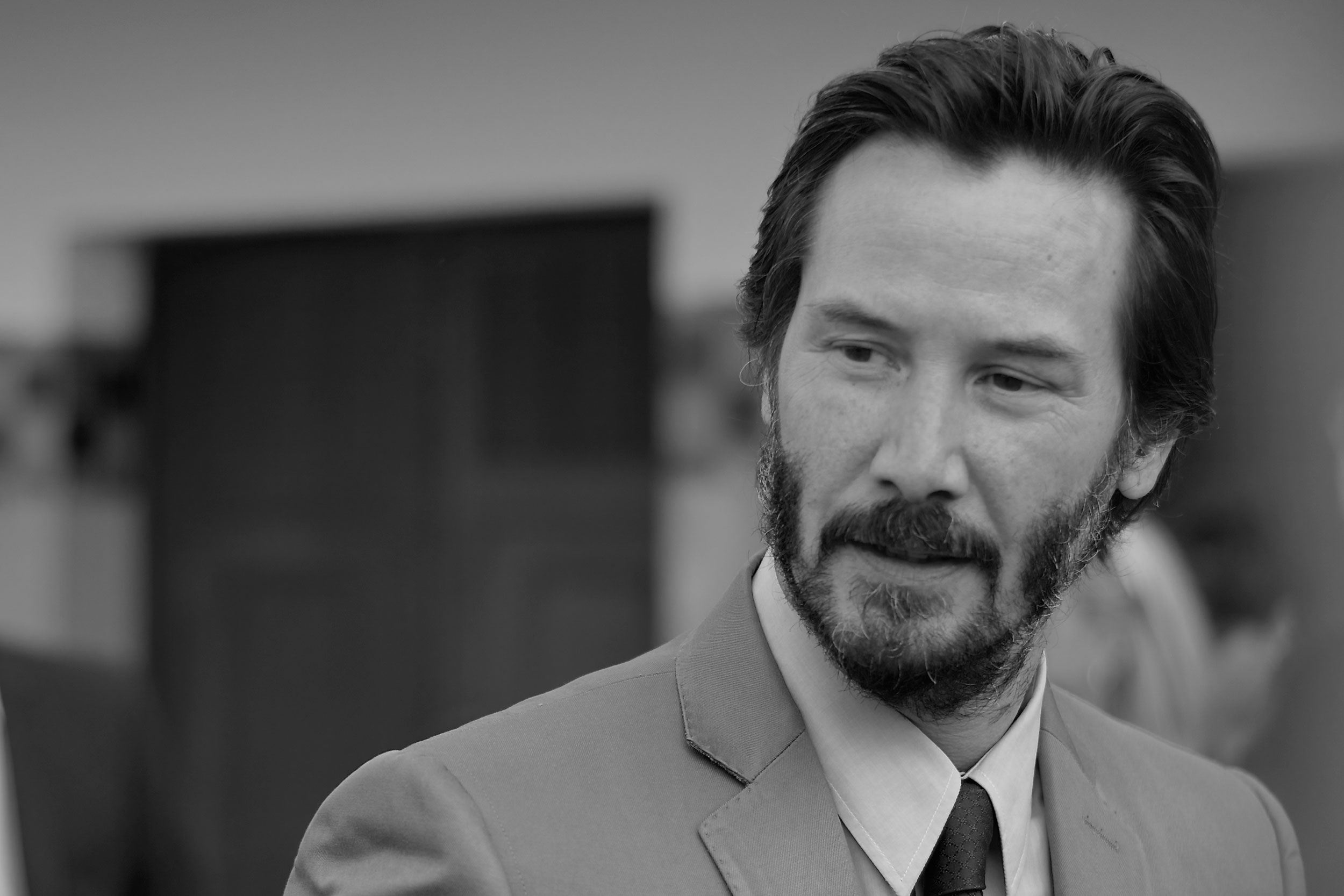 We’re starting a new series on these pages where we ask friends, colleagues, random strangers—all of them experts in their field—a single question on a single subject. We begin with what seems to be our current cultural obsession: Keanu Reeves. But why Keanu?

To get to the heart of the matter, we reach out to longtime friend Hemal Jhaveri, who spends her work days writing about sports but, far more importantly, hosts the most excellent Culture Time podcast, a show dedicated to deep dives into pop culture obsessions. This most recent second season brings on other longtime friend Brian Minter as co-host and is dedicated to the man, the legend, Keanu. And if you’re wondering, this Keanu-dedicated series started way back in November of 2018, so Jhaveri + Minter (pictured below, in front of what looks to be a gigantic Trapper Keeper at their live Culture Time Q+A at the Smithsonian last month) are way ahead of the curve on this one. 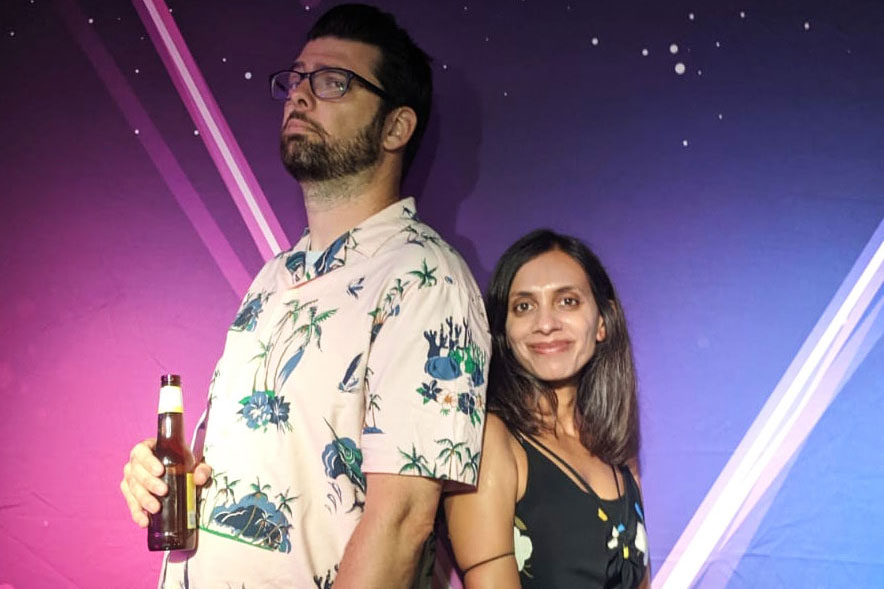 But on to our question: Simply—Why Keanu?

Keanuologist Hemal Jhaveri: Authenticity is a word that gets thrown around a lot these days, in the sense that everyone seems to be obsessed with it.

There are a lot of very smart cultural critics out there who addressed the Keanu phenomenon better than I can, but I think a large part of it, certainly, boils down to his authenticity.

We all want to live an “authentic life,” whatever the hell that means, and I think a deep undercurrent of our cultural fascination with Keanu Reeves has to do with the fact that he seems to be someone who is super fucking authentic.

Take, for example, this video, from about a decade ago, of Keanu giving up his subway seat for a woman carrying a large bag. Keanu clearly doesn’t know he’s being filmed when he gets up and performs a gesture of such basic human decency that it goes viral.

Here he is! A big movie star! Giving up his seat! On the subway! Like an actual person!

There are, of course, a ton of other “Keanu Is a Nice Guy” stories and we, as a nation, can not seem to get enough of them. There’s the time he caravanned with a group of stranded airline passengers all the way to Bakersfield, the time he helped Octavia Spencer, then an unknown actress, when her car broke down, the time he bought an ice cream bar at a movie theater just so he could sign his autograph on the back of the receipt for the box office attendant.

We love those stories, not just because they soothe something broken in us, but because they’ve all happened out of the glare of the spotlight, because they seem to be authentic, genuine gestures of his kindness. 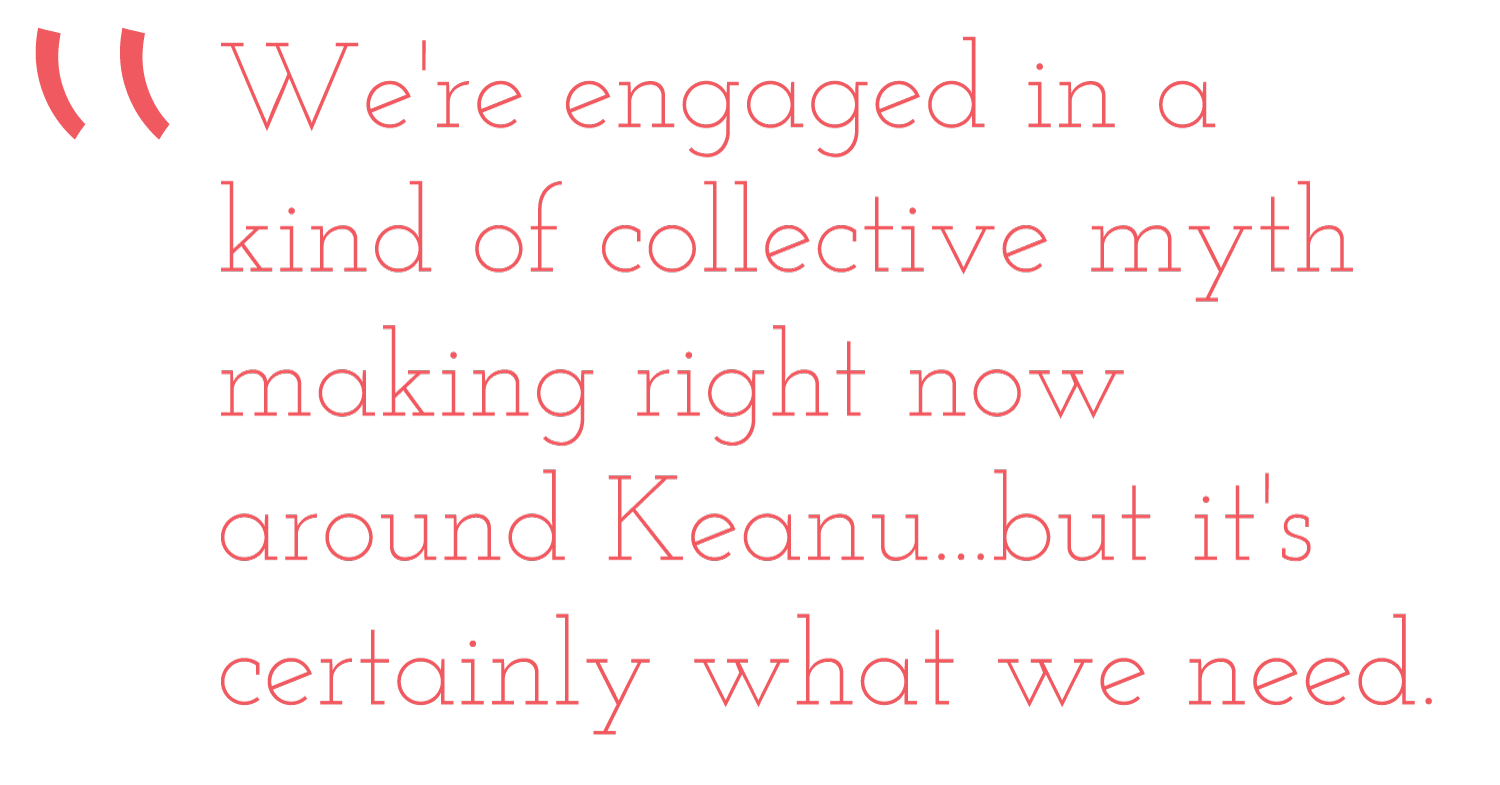 Take away the acts of kindness and there’s still the Sad Keanu meme, the countless images of him just chilling, staring into space and eating a sandwich on benches across LA. He looks, in a world where everything we see is so coordinated and produced, completely unguarded and disturbingly human.

In many ways, it’s hard to separate Keanu the man from Keanu the actor, and we carry all this baggage with us when we watch his movies. How can you not root for a guy who will hunt down the assholes that killed his dog and will also go out of his way to make a stranger’s day better? The iconic roles he’s played, from Ted to Neo to John Wick, all hold a special space in our cultural hearts, and it makes sense the man who plays them should too.

We may have come around to Keanu again because of how good he is at making movies, but we’ve sunk our teeth into him again, culturally, because of his affable kindness, his accessibility, his authenticity.

He is one of us and yet, not one of us, and that makes us love him more. You get the feeling that, under the right circumstances, not only could you enjoy a beer with the guy, but maybe be his friend. He’s rich and famous, but still sad and weird.

We’re engaged in a kind of collective myth making right now around Keanu, making him out to be greater than the sum of his parts maybe, but it’s certainly what we need. We need reminders that good people exist, that it’s possible to be rich and also not a dick. That, in our age of oversharing it’s OK to want to keep things to yourself, that you don’t have to totally bankrupt your interior life for the sake of success. That there is a way to live in this world with kindness while being true to yourself.

It’s a lot to heap on anyone, much less the dude known for saying “Whoa” in the Bill and Ted movies, but, for better or worse, this where we’ve landed.

I certainly don’t expect Keanu to save us, but he’s a bright spot in a bleak and dismal cultural landscape. It’s nice knowing Keanu is out there, like a third-tier superhero, just waiting to make your day better.

If you’d like to read even more about the man—nay, the force of nature that is Keanu Reeves—Culture Time co-host Brian Minter wrote a thoroughly researched and scientifically tested piece on the subject last month titled “America Loves Keanu Reeves: A Scientific Analysis” and it will indeed answer all of your questions.