With winter-like weather in both of the cities we consider to be our hometowns—NYC, where it’s currently in the lower-to-mid-fifties, pitch black, cloudy, windy, and on the verge of a GNR-approved cold November rain; and LA, where it’s crystal clear and in a solid, crisp mid-sixties (the approximate Los Angeles analog to the current New York weather)—we soldier on with an especially heated up Taco Tuesday entry.

These tacos are built around yellow farmers’ market Manzano peppers—an small apple-shaped chile (thus the name) with tiny black seeds, a bright, fruity taste, and a heat level between 12,000 and 30,000 on Scoville heat units (SHU) scale, making them anywhere from 2 to 12 times as hot as jalapeños. So, not for the light of heart.

We slice up the peppers into half circles along with farmers’ market red onions and mint and then quick-pickle it all, tossing the mixture in a half cup or so of Bragg’s apple cider vinegar and allowing it to sit for 15-30 minutes. This reigns in the heat of the peppers a little bit and plays up their fruity taste with the piquant of the vinegar. Then we cube and brown chunks of tempeh in olive oil in a heavy bottom skillet, removing from heat and tossing with a mixture of ground cumin + turmeric. Once that’s done, we set the tempeh aside and roast some fresh corn tortillas directly on the flames of the stove (we love these from Tortilla Land) flipping to toast each side and being careful to not burn them beyond edibility or set off our smoke alarms. Then we dress with a dollop of Vegenaise and some fresh arugula and add the tempeh and pickled mixture. The result’s a fruity, fiery, savory taco that’s quickly become a favorite at home.

Give them try to warm up your winter day. Just, yeah, don’t burn your kitchen down. 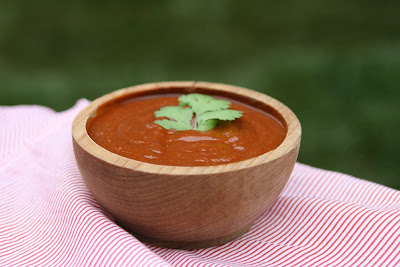