Alright, we here KoR aren’t ones to fan the flames of unnecessary fights in most cases. Unless it’d be super-funny, like when you convince your one friend who’s weirdly competitive with board games and your other friend who’s always very, very high to sit down to a game of Diplomacy. OR, OR, a bunch of you are in the car and the dude in the passenger seat falls asleep and then you all scream like you’re about to be in an accident. Funny stuff, people. Funny stuff.

Be it also known, friends, that we are certainly not ones to cheer on in-fighting among already marginalized or under-represented groups…let’s say, vegans. Unless they’re total jerk-ass vegans (you know who you are). But, all that said, we have been hearing many, many whispers of late about a truly exciting thing, and we needed to put it to the test. A thing that, for so long now, has always been *just* out of reach to us all. A thing that—should it prove to hail from the world of hard, undeniable facts and not the ethereal, fictional dream-world—would change our vegan lives. The thing of legends. That’s right, the lost arc of the covenant to vegans—tasty, convincing, stretchy, some might even say…”cheese-like” vegan cheese—was said to be at hand. Dear vegans and nons, we are here to tell you, Daiya is the shit.

As in, it’s a really good thing. Reference point for potentially older readers: The Bomb, or perhaps, The Bomb-digity. Younger readers: I don’t know. What do you say now? The Twitter? The Twighlight? Maybe it’s gellin’? Anyway, point being, it’s good. The shit is good.

Now, like many vegans, the first experience we had with vegan cheese was with Tofutti Soy-Cheese Slices. Honestly, it handled itself alright on a vegan grilled cheese every now and then, but the taste was WAY off and they never really melted that well. And, though I didn’t care about this much back in college, they’re also something like 70 calories per slice, nut-balls fatty, and super bright orange. But c’mon. They were around in the 80s, man. That’s awesome. I realize the market was more Orthodox Jews than straight-edge vegans, but—with their non-dairy ice cream, sour cream, and cream cheese—you have to tip your hat to Tofutti for gettin’ in there when no one else was around. Speaking of, check out this kind of awesome 1986 article on Tofutti and founder, David Mintz, from New Jersey Business.

Since then, thankfully, there have been a number of great attempts at working up a convincing, cookable vegan cheese substitute. The old-schoolers who started the southern California company Follow Your Heart—who produce, among other tasty items, the very superb Veganaise—gave us Vegan Gourmet. The Spanish company, Redwood Foods gave us the costly to import but pretty decent Cheezly. And, just last year, the innovative team at Chicago Soy Dairy (nice site re-design, by the by) gave us the reigning champ, Teese. We actually did a full review of Teese this past January and, as you can tell, we loved it. Superbly melty, pretty cheesy taste, and light-years ahead of other melty vegan cheese products. Really, there was little to no competition, in our humble opinion.

Until now. We had heard a lot about this secret Canadian vegan cheese—that it melted even better than Teese, that it actually tasted like cheese, that its secret recipe was guarded by genuine mounties and it cured any number of diseases—and we were lucky enough to try it earlier this year at a potluck where, evidently, some ninja-like vegan was able to steal away with the top secret stuff and make a couple quesadillas before being apprehended by Canadian authorities. We got a triangle or two (seriously…have you seen vegans at a potluck before?) and loved it. So when we heard that Rockville, Maryland’s Pangea Vegan Store had started packing and selling it, we jumped at the chance to order some. Not like a ninja jump. More of a ‘Hey, We’re Excited’ jump. We may have clicked our heels mid-air. 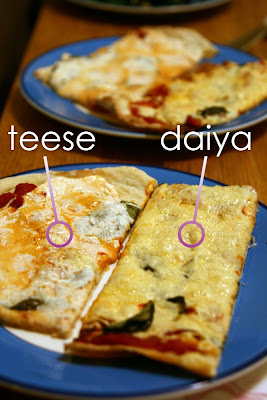 So, with the Teese we already had on-hand, we started the cheesedown, working up a nice dough from a Sullivan Street Bakery recipe and keeping the toppings simple so we could concentrate on the cheesiness. Now, again, it should be said, we went into with no pre-conceived notions and no bias. It should also be said that Teese has had a great run and given us many nights of wonderful cooking where we could almost forgot we were vegan. All that said though, Daiya totally kicked Teese’s ass in all categories. Like, pummeled it. Were vegan cheese able to weep openly, Teese would have certainly done so.

First and foremost, let’s talk taste, because, honestly, if it doesn’t taste good, who cares how well it melts. Daiya straight-up tastes much cheesier than Teese. The problem we’ve always had with Teese is that it tastes way too sweet and buttery, not savory enough. We even told the company as much way back when as they were looking for feedback. And, to be fait, it did get a little better over time. But Daiya is already much more on the savory side and, though it’s still a few steps off from a perfect cheese taste, it’s really, really close.

Next, meltability and texture. Honestly, both melt very, very well, especially in a 500 degree gas oven. What’s important to note though is that Daiya stays melty and even starts to get a little stringy once it cools, making it even tastier as it sits. Actually, with our first few bites, when the pizza was still pretty hot, Daiya comes off a little too gummy and sticky. The taste is still great, but the texture is much better when it cools a bit. But with Teese, it tends to congeal quite a bit and gets a little rubbery as it cools, so the illusion of vegan cheese heaven wears off much more quickly.

With the contest behind us, we had half a bag of the ‘italian’ Daiya and a full bag of the cheddar to pay with. So the next couple weeks were pretty much a vegan cheese whirlwind (mmmm) of blissful cooking. First we made some homemade manicotti using the superb egg-free pasta recipe we’ve lauded before and the italian Daiya (pictured below). Then, with the cheddar, we fulfilled a dream of mine and made cheesy, heart-stopping enchiladas that really were amazing. After that it’s a blur. I think there may have been some quesadillas? A mozzarepa? A cheese castle of some sort? Regardless, the results were all wonderful and, yes, we’ve fallen in love with Daiya.

The only current problem is availability and shipping. Daiya still seems to be working on the best plan for getting this out to customers, but they’re actually focusing much of their energy on getting the product out to restaurants and the like to make it available to the public. I’ve heard of some Whole Foods markets in L.A. that have already started making Daiya pizzas in their wood oven pizzas. So, if you have a restaurant that you think might be able to carry the stuff, definitely send them on to Daiya’s site. But, until we can walk down the street and get a vegan slice from the neighborhood pie shop, the rest of us will have to settle for ordering it from Pangea, who currently ships the cheeses out in a giant styrofoam box with a freezy pack. I can only imagine this will get streamlined with time, but the extra cost and waste of the packaging is kind of a bummer. But I guess that just means you have to order a bunch when you get it.

So, again, we don’t mean to fall prey to in-fighting and don’t want to seem like we’re just jumping on the next bandwagon here, but, really, Daiya is great and we’re thrilled that there’s room for competition in our tiny, very needy vegan market. So ball’s in your court, Chicago Soy Dairy and anyone else who can step up to the plate…I’m totally mixing sports metaphors, aren’t I. Point being, if you can make an awesome vegan cheese, I’m buying. 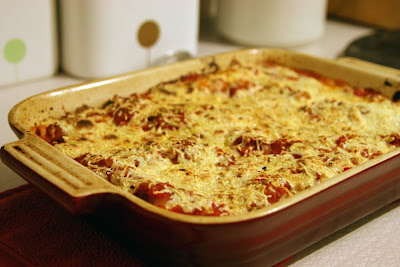