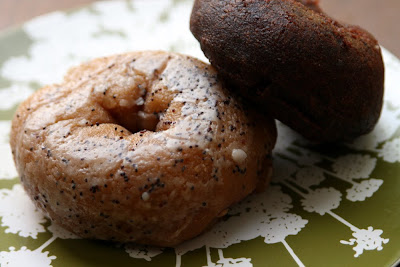 An Open Letter to Mighty-o Donuts

Last summer, while visiting a good friend of ours in Seattle, my wife and I happened, by chance, upon your donuts in a local grocery store. We’re both vegans for ethical reasons, so, needless to say, when we realized that your donuts were made sans any animal-derived ingredients, we loaded up. Now, being vegan is tough, man. Maybe you know this already, but we miss out on a lot of good stuff. Cheese is the most likely candidate for vegan kryptonite, but, right below that on the list, for me at least, are nice, cakey, awesome donuts. Don’t get me wrong. I live in New York City, arguably one of the best places for a discerning vegan to live. So I’m already spoiled. I have easy access to a bevy of superb vegetarian restaurants, can walk to cafes that sell the always superb cakes from Vegan Treats, and basically have little to no call for complaint…except in this case. I was fine before I ate your warm, soft, sweet donuts—living in blissful ignorance of the wonders that could be contained in those decadent rings of joy, placed there by whatever black magic you conjure in your kitchens. But after that fateful meeting between me and your donuts last summer, I slipped into a state of hysteria. They could barely get me on the plane back to New York. And, once back, I slept sparsely, in fitful starts and stops, plagued by odd dreams of mocking transcontinental Dali-esque donuts. It was a long, tortuous road to recovery, but, with the help of my wife, I put my life back together and was once again a whole man.

Then, the other day, I received an unexpected call. Our friend from Seattle, Patrick, had placed in the care of his visiting cousin from New York one dozen Mighty-o Donuts to be delivered to and consumed by me. It was all too much. How could I once again introduce to my poor mouth something so very treasured and yet so very irreplaceable? But there was no way I could deny the allure of your fine products, gems of the baking world and, once again, my Achilles heel. As I write this, I have just finished consuming the fifth donut—a lovely lemon poppyseed—leaving me with a mere seven. I plead with you: You must open an east coast Mighty-o Donuts in New York before I finish that last donut…preferably in or near Park Slope, Brooklyn. My life depends on it. What to Eat Next Week