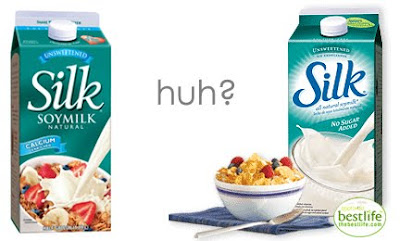 Being designers by trade, when shopping, we tend to notice things like packaging, labeling…you know – design. We often buy wine simply because it has a nicely-done label. We’ve recently even gone as far as conducting a “Judge a Book by its Cover” experiment, where Katie and I both bought new novels from Word bookstore in Greenpoint based only on their cover designs. Results: Katie’s—The White Mary, by Kira Salak—awesome; mine—The Island at the End of the World, by Sam Taylor—pretty okay. Check out that cover though, man. Point being, we like to support companies and individuals who hold high a decent level of a aesthetic sense. So imagine our disappointment when, at the store the other day, we noted the new, very lame packaging for Silk Soymilk. Not only did they just redesign their packaging last year, but now they seem to be taking a note from the Pepsi/Tropicana move earlier this year. Remember the new cartons for Tropicana that literally lasted mere months? They were near impossible to decipher and L-A-M-E. I think I stood in the fridge section of a local Associated for ten minutes trying to figure out which one was “Some Pulp.” They soon after wisely switched back to the old packaging (some dudes got FIRED for that, man). I can only hope Silk gets their wisdom on too. As Katie said, “It makes it look like I’m buying generic milk. I don’t want to look like I’m buying generic milk.” 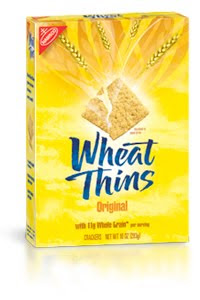 In other product redesign news, Nabisco has given Wheat Thins a facelift. I’d say it’s an improvement, but, more importantly, they’ve accompanied the redesign with a change in the ingredients: No more high fructose corn syrup! Exciting news for me, as these have always been my favorite mainstream crackers and I, sadly, stopped eating them when I started learning more about high fructose corn syrup and its associated grossness. Yes, yes, I know that it’s debatable as to whether HFCS is that much worse than any other sweetener, but I feel pretty good about avoiding an additive that’s derived from a government-subsidized corn surplus and processed to contain ultra-concentrated sugars that are near unrecognizable as sugars by the body and thus go straight to fats. Boooo, that. And yay, the return of my favorite crackers. If you’re wondering, it looks like HFCS has been replaced with barley- and corn-based malt syrup…so who knows how much of a difference this will actually make in the product and, yes, it’s likely much more a PR move. But it is interesting and seemingly significant that a major corporation is making a show of the lack of HFCS in one of its products. Also, check out their kinda weird new site.
Finally, for anyone in NYC who doesn’t already know, our favorite vegan cheese product, Daiya, is now being used in the Park Slope vegan eatery, V-Spot, and they’re now even selling it retail for use at home. I highly recommend making a pizza with the stuff. Or enchiladas. Or a quesadilla. Or lasagna. Or… Here’s an updated list of places all around the country that carry Daiya.
Now get out there and make a cracker-soy milk-vegan cheese casserole. Mmmm.
MORE