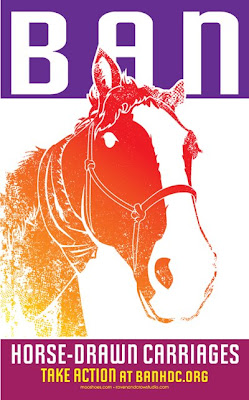 We at raven + crow studio recently teamed up with vegan super-store, MooShoes, in an effort to put an end to horse-drawn carriages in New York City. In support of the on-the-ground and lobbying work of the NYC-based Coalition to Ban Horse-Drawn Carriages, we designed and printed two original posters with which we hope to soon cover the city. We’re asking interested business owners to put up the posters in their shops and get the word out.

When we first visited Central Park—a long, long time ago— we were both immediately struck by how SAD the horses seemed. Obviously that’s not the most articulate of arguments to move the more than 200 horses in the industry to more fitting environments, but it is one that I think is intuitively…’felt,’ for lack of a better word…by many people who first encounter them. But after attending a filled-to-capacity public hearing at city hall earlier this year and starting to do some reading on our own, we soon found out how hard it is to deny that these usually majestic animals are living out truly depressing, shortened lives in an environment that’s so very far from natural or safe.

The main and most compelling argument against banning the carriages from the city is that we would be eradicating over 200 jobs in a time that’s undeniably hard for everyone, especially blue-collar workers dealing with the expenses of living in and around New York City. But the truth is that it never should have been a job in the first place. These horses are living and working day-to-day in one of the most crowded, active cities in the world, pulling carriages in the middle of congested NYC streets, all to entertain the tourists of the city. It’s no different than the exploitation of elephants or other wild animals in the circus, some could even argue it’s worse.

Others (BanHDC, PETA) can argue these points much better than us—which is why we’re trying to contribute in an area in which we’re more skilled—but it’s something we feel passionately about and something we want to change about our city.

If you own a business or have a space you can put up one of these posters, or know someone who does, email us and we’ll get you some. And for the rest of you, come out to this Saturday’s rally at noon in Columbus Circle. It’s an international event and will have cities around the world participating, so get it on, ya’ll. 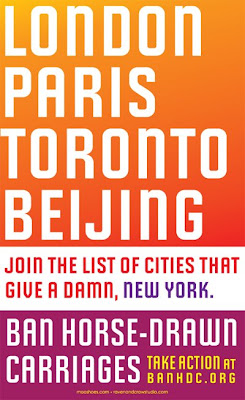