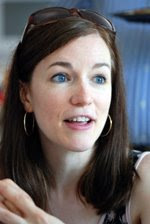 We here at Kindness of Ravens are fortunate enough to know a number of talented, creative, otherworldly-awesome individuals. One of those individuals is Deirdre O’Connor, a New-York-City-by-way-of-Boston playwright who recently opened her play, Jailbait, at the Cherry Pit Theatre to rave reviews. We recently got a chance to catch up with Deirdre to talk about the play, Goldie Hawn, the vulnerability of life, and robots.

aKoR: So, first question: How did you get into writing? Was it something you always had an interest in? Did anything lead you into it, like storytelling around the campfire or running games as a Dungeon Master?

DO: I was raised by nerds. Seriously. My mother would recite Shakespeare at breakfast, play Broadway musical soundtracks with dinner and read Robert Frost poems to me before bed. And the most valued skill around my family dinner table was the ability to tell a great, funny story. So I think a lot of my interest in storytelling came from trying to keep up with my older siblings. They are infinitely funnier than I am, but fortunately, I’m not above stealing their jokes.

Do you have any interest in non-stage/-screen writing? Could you see yourself writing the next great American novel, for instance? It seems like such a different style of writing to me, but I suppose it’s all about telling an interesting story, right?

When I was in high school I wrote a lot of terrible short fiction and poetry. But when I first tried playwriting in college I discovered that I really just love writing dialogue. Seriously. I love the way two people stammer and stutter their way through a conversation and use and misuse words. I love the way people try to guard their inner thoughts but end up unintentionally revealing their true feelings. Dialogue. It’s like crack for me.

In your opinion, what’s the key to good writing/storytelling?

I think the three most important elements are great, layered characters, clarity, and emotional honesty. Of these three things, I personally think emotional honesty is the most difficult to do. Because you just can’t fake it.

You’ve just finished the preview stage of your new, fucking excellent play, Jailbait, and are now up and running with the regular screening of the show at the Cherry Pit Theatre (March 19 – April 25). How’s it going? Has the response been largely positive?

The play is going really well, and the response from audiences and critics has been hugely positive. Audiences tend to have a really personal response to it and afterward people often want to talk to us about their own experiences as teenagers. Seeing people connect with the play in that way is both lovely and humbling. And honestly, I have to give a lot of credit for that emotional connection to the cast. I am so awed by what those actors do on stage every night. I have a giant talent-crush on them. Giant.

So, the play ran last year with a slightly different cast at the Cherry Lane Theatre. What’s with the separate run? And the fascination with cherry-themed venues? Are you hoping to next take the play to the Cherry Grove resort on Fire Island, by chance? I think you might need to switch the two women out of the cast for that one…

My ultimate goal for this play is to take it to every cherry-themed venue in the country. Because who doesn’t love cherries? Actually the Cherry Lane Theatre runs the Cherry Pit. They produced a two-week developmental workshop of this play last year as part of a program called The Mentor Project, and based on the success of that workshop they decided to produce the full run that is up now. The workshop was great because I really got to see what worked and what didn’t with our audiences last year, and then I was able to hone the play for this current production. And as a result the play is much more polished today.

Very polished, indeed. One of my favorite scenes in the play is when Claire (played by the stupendous, Natalia Payne) is trying to relate to the older Robert (played with skillful realism by Kelly AuCoin) about his recent break-up and ends up talking theories on life, love, and the impact people have on one another as they evolve and grow. Some of my favorite stories are told in this manner, where the narrative breaks down at points and opens up into these beautiful thoughts or feelings about life that seem larger than but still related to the telling of the story. Then, the next thing you know, you’re laughing about some great joke that punctuates the whole statement. That kind of writing seems so skillful in its ability to sneak into your heart and play on your real-life emotions. How the crap do you manage something like that?

Thank you. That scene is really the heart of the play. It’s essentially a meet-cute, which is my favorite kind of scene to write. I think people are inherently funny, especially when they’re feeling insecure or vulnerable. But the other side of that is that people genuinely want to connect to others and feel seen. So that scene is all about Claire and Robert, who are two very different people, slowly starting to feel safe enough with each other to let down their armor. In my mind that’s the most exciting thing in life, when you meet someone who makes you feel like you can let down your armor. And then of course it doesn’t hurt that we cast two insanely talented performers. Kelly and Natalia would make my grocery list sound funny, sexy, and charming.

Who are some playwrights out there today that you feel are worth following? Living in New York, I feel like following the world of theatre is a full-time job. I’m always looking for some recommendations by those in the know.

Michael Weller, Gina Gionfriddo and Itamar Moses are all writers whose work I seek out because their plays are always top-notch and yet you never get the same thing twice. They are writers who consistently challenge themselves and their audiences in new and exciting ways. I should add Lisa Kron to that list. Her plays are amazing, and I am in awe of her ability to make an audience laugh. I also have a lot of other favorite writers who don’t get produced enough in this city, but that’s another list for another time.

I’m wondering why there weren’t more robotics in your play. I know you’ve spoken out in the past about productions like Robocop: The Musical and Young Optimus Prime. Was the lack of animatronics and actual robots representative of a statement you were trying to publicly make or was it more a result of the current economic crisis?

The next play will have robots. I promise. Just for you, a parade of robots.

We thank you. This makes a nice segue, though, into your work on The Electric Company. I was always a fan of the show as a kid and, now it’s been brought back to life, all urban and hip-like. On the negative side: No more Spider-Man features. On the plus: You’re one of their new writers and have created a loveable, mischievous little robot character (see above referenced segue.) How did you end up writing for them? How’s it different writing for TV than it is the stage? Do you blame Tobey McGuire for the lack of Spider-Man? I do.

I love writing for The Electric Company because I’m helping to teach kids how to read and at the same time I get to be completely zany and ridiculous. I basically get to be immature for a living. I actually was hired to work on the show because the head writer saw some of my work as a playwright and thought my sense of humor would translate well into writing for kids. Or as he put it when I interviewed for the job, he thinks I “have a screw loose, and that’s a good thing.” There are a lot of similarities between writing for television and writing for the stage, success in both really depends upon having great characters and staying true to them. The main difference is that writing for television is much more collaborative than writing for theatre. And that was scary at first because I had to let go of some control. But fortunately the other guys who write for The Electric Company are some of the funniest, most talented writers I know. So collaborating with them is a blast.

Not to wish away the current spectacular run of Jailbait, but any idea what you’ll be working on going forward?

I’m currently working on a play called Assisted Living that’s going to have it’s first reading in San Francisco in May. It’s about a woman who sacrifices her own happiness to spend her life caring for her ailing mother. And she ends up falling into an unlikely romance with her mother’s male nurse. See? I wasn’t lying when I said that I really love writing meet-cute scenes. And… the play also has robots… yeah. A parade of robots.

Well-played! Alright, we’re nearing the end of the interview, so let’s move into Quickfire mode. Favorite TV show ever?

The Wire. Seriously, if you don’t love The Wire, you can’t be my friend.

Oh that’s a tough one. Hoosiers? Good Will Hunting? The Ice Storm? I think in some ways the film that had the biggest impact on me in terms of writing was a little film called Spring Forward starring Liev Schrieber and Ned Beatty. But if you judge based on number of viewings it’s Overboard starring Goldie Hawn and Kurt Russell. Is it just me, or is that movie on television 24 hours a day?

Okay, what’s with Boston Baked Beans? They’re not beans, are they even baked? These guys piss me off.

Do you mean the candy Boston Baked Beans? Those things are evil. Pure candy evil.

Thunder Road is my all time favorite song. Because it’s both hauntingly sad and gorgeously hopeful. And because the line “show a little faith there’s magic in the night, you ain’t a beauty but hey you’re alright, and that’s alright with me” is quite possibly the most real line about love ever written. 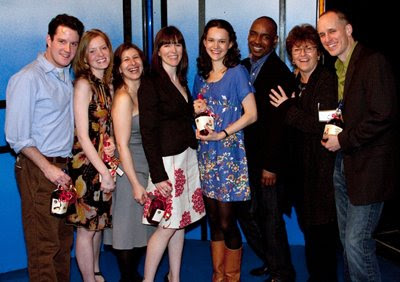