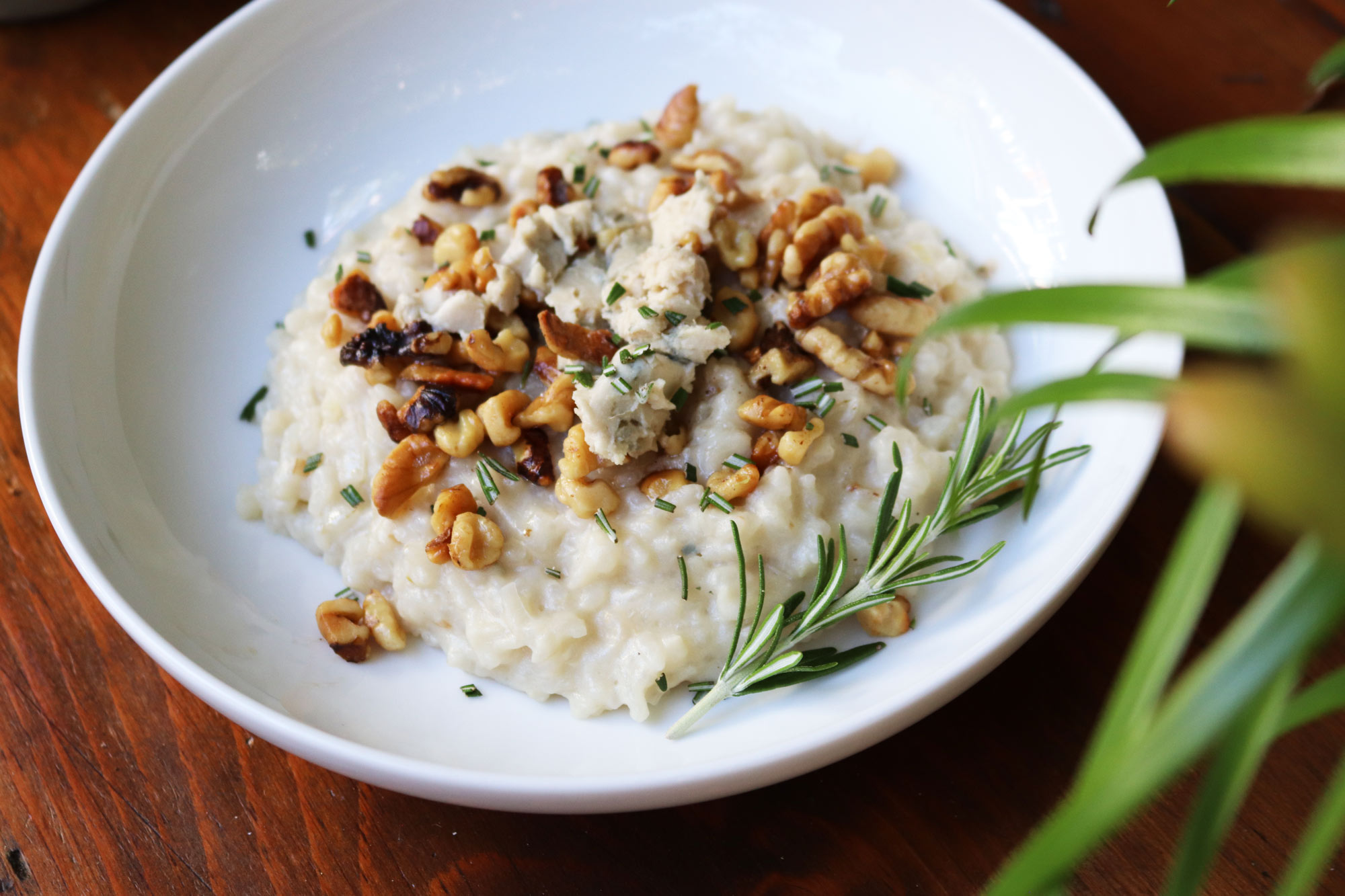 I’ve think we’ve talked about this here before, but we made a really, really big mistake post-college when we moved to New York City—we stopped being vegan. We were still vegetarians, we just started giving in to the early-aughts temptation of super-fancy cheese for a bit. This era of our lives was short-lived (we started to do more design + marketing work for animal rights orgs. and couldn’t keep ignoring the inherent violence + tragedy in the dairy industry), but it did bring into our lives some pretty amazing tastes that we then turned our backs on. One that we missed especially was that of gorgonzola—that intense, blue-and-green-veined cheese that brought together a rich butteriness with a tangy umami.

But a few months back, on a trip to our neighborhood vegan grocer, Besties, a new vegan blue cheese was recommended to us—Coco Blue, a vegan cheese that’s made right here in Los Angeles by Katona’s Creamery, who uses the same aging process as their dairy-based blue cheese counterparts. As fate would have it, Elizabeth Katona had just debuted the cheese at Bestie’s earlier that day. We took it home and tried it with crackers and were immediately brought back to those heady, dairy-eating days in our early twenties—it was dead-on and we’ve never had anything in our roughly one million years of being vegan that even comes close to this level of blue cheese authenticity. That first batch of Coco Blue quickly sold out and we’ve been champing at the bit for more ever since.

Until last week, when Elizabeth kindly delivered another batch to our doorstep (which she’s now doing in select areas with the city-wide COVID shut-downs). First order of business, try the new batch to see if it holds up (it did). Second order, make the blue cheese walnut risotto we made on the regular in Brooklyn, minus the dairy. We promptly did and it came out wonderfully, so we thought we’d share the recipe here. Bonus—if there are any left-overs, you can make arancini.

So let’s start with the bad news—if you’re not in the Los Angeles area, sadly, you’re likely not going to be able to get this cheese. Amazing as it is (and it really, really is amazing), it’s really new to the market, made in very small batches, and not widely distributed right now. If you are in the Los Angeles area, we do highly recommend trying to get some. You can check with Bestie’s or message Elizabeth via Instagram to see if she can deliver in your area.

Some other options—depending on where you live, there may be some other local purveyors of vegan cheese who make a blue (we know our friends at NYC’s Orchard Grocer sell one by Cheezehound, out of the Catskills). And there are some recipes online for a homemade vegan blue cheese, none of which we’ve ever tried. Or, if you’re just looking to make a simple risotto and want to use this recipe as a template, you can do that too and skip the vegan cheese altogether. As someone told us years ago, the thing that makes good risotto creamy isn’t dairy, it’s the constant stirring and agitating of the rice grains that shed their outer starch over time as they’re cooked. So if you do that, maybe think about sautéing some chopped garlic in the butter + oil up front to add some flavor. Or use the more tame risotto as a base for some additional, more flavorful toppers, like spicy Italian vegan sausage.

Regardless, start by adding your risotto to 4 cups of filtered water in a large bowl. Some like to use broth here, which we’re usually all for, but we like a very clean, light-in-color risotto that’ll let the other flavors shine. Using a stock is going to give you a less subtle taste and more color than we care for in a risotto like this. Agitate the rice with fingers or a fork or whisk to release the starch into the water. Do this for a few minutes, until the water starts to become milky. Drain through a sieve over a bowl or other container, reserving the resulting liquid (we’ll add this later to give the dish a nice, thick fluffiness).

Now, setting aside 1 tablespoon/half an ounce of the vegan butter, melt the remainder in a skillet over low heat, mixing in the olive oil. Note: We usually use a cast iron for more everything; this is an exception, for the same reason we don’t use broth—this recipe’s shooting for that aforementioned tasty-but-clean base. If you don’t have or don’t want to use vegan butter, though, just supplement with the appropriate amount of olive oil (so, 5 or so tablespoon total). Now add the shallot and raise the heat to medium, allowing the shallot to caramelize and begin to become fragrant, but not overly browned (five or so minutes).

Carefully add your drained rice, continuously stirring and allowing it to sauté and brown a bit in the butter-oil-shallot mixture, which should smell pretty nice right about now. Carefully add the cup of white wine, continuously stirring (you’re basically stirring this whole time). If you don’t want to use wine, do this with additional filtered water instead or, if you want a little of the acidity that the wine gives the finished dish, add a little rice vinegar to your water.

From here on out, the name of the game is add liquid, cook it off (uncovered), repeat, always gently, thoroughly stirring and making sure the risotto isn’t sticking to the bottom of the pan. Once the wine’s gone, move on to the starchy water. Once that all cooks off, give the risotto a taste—it should, at this point, be fluffy and the cores of the grains of rice shouldn’t retain any residual hardness. If it’s not fluffy and entirely soft, add more filtered water 1/2-1 cup at a time and continue to cook off, salting to taste as you go.

While the risotto’s getting to a good consistency, in a second skillet (this one can totally be cast iron), melt the remaining one tablespoon of vegan butter (or heat equivalent olive oil) over medium-low heat and then add your crushed walnut pieces, stirring until browned evenly (this should just take a few minutes). Set aside away from heat.

Once the risotto is nice and fluffy and has a good mouthfeel and taste, add all but an ounce or so of the Coco Blue, chopping into pieces and stirring to incorporate into the risotto. It should give off a nice, blue cheese fragrance at this point. Plate and top with your browned walnut pieces, the remaining blue cheese, crumbled, and a little chopped rosemary, sage, or the like. Serve immediately and enjoy. 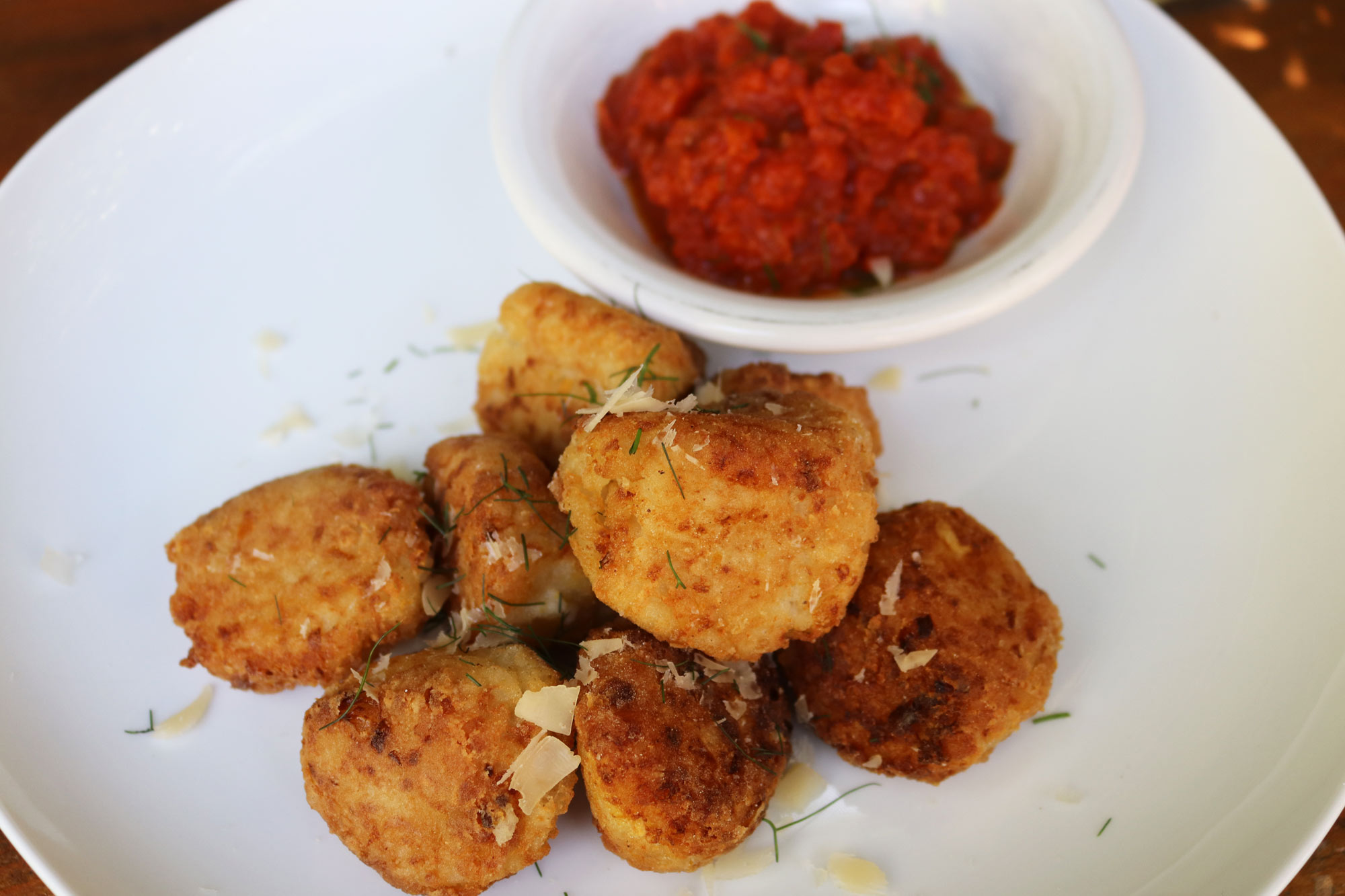 If you have any leftovers, why not make arancini from the refrigerated rice?

All you need to do is heat an inch or so of high heat cooking oil over high heat, roll the cold rice into balls about two inches in diameter, and then roll those in a bowl of rice flour, wheat flour, or really, any kind of flour with a little salt and maybe a little nutritional yeast (only if you have it). Then carefully add them to the oil with enough room between that they’re not touching. Carefully turn as they cook, browning to a golden brown on all sides. If you like, you can stuff a little meltable vegan cheese in the middle (we used a little broken up Follow Your Heart vegan Provolone and it worked great, creating a melty center). Serve with a nice pizza sauce for dipping. 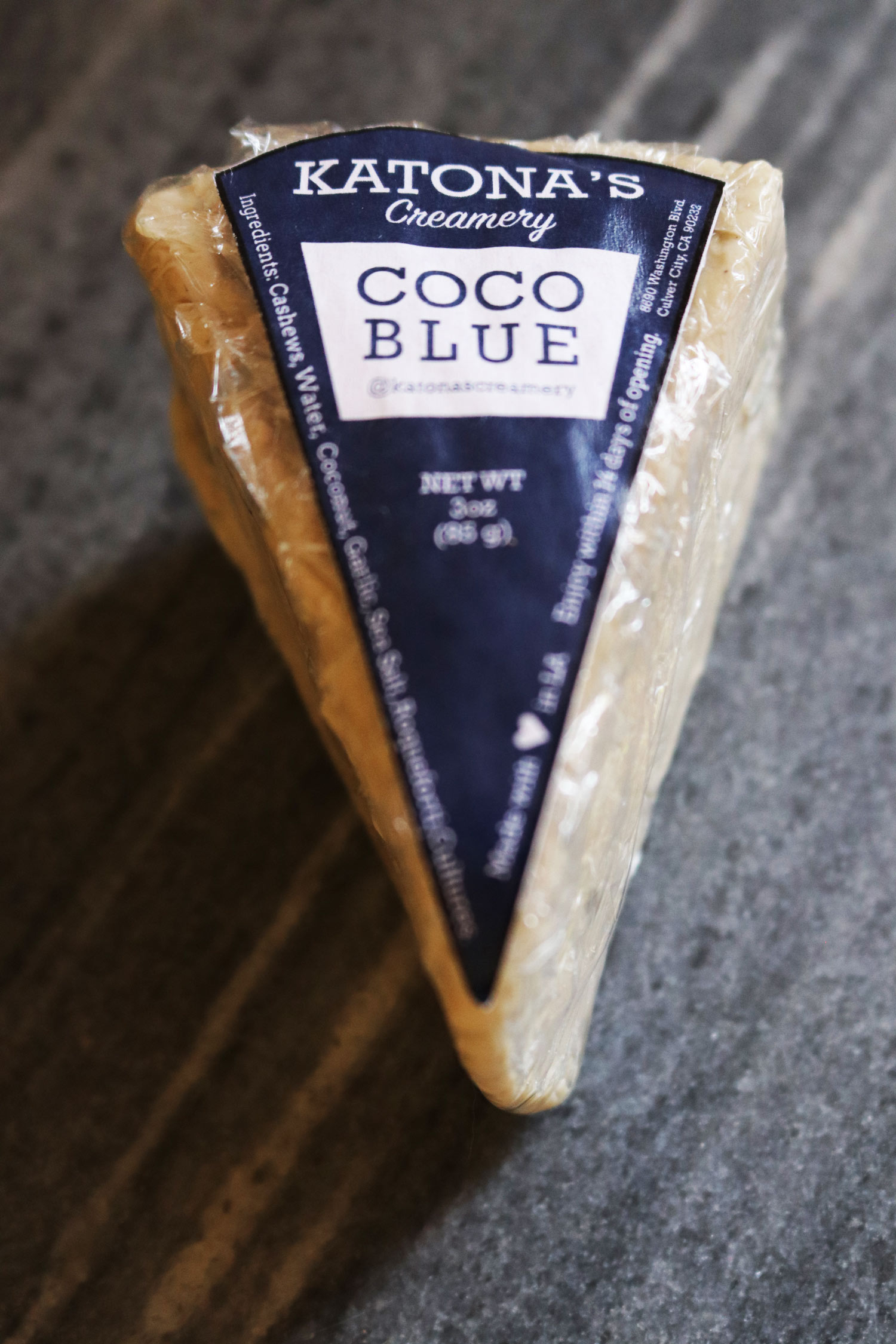 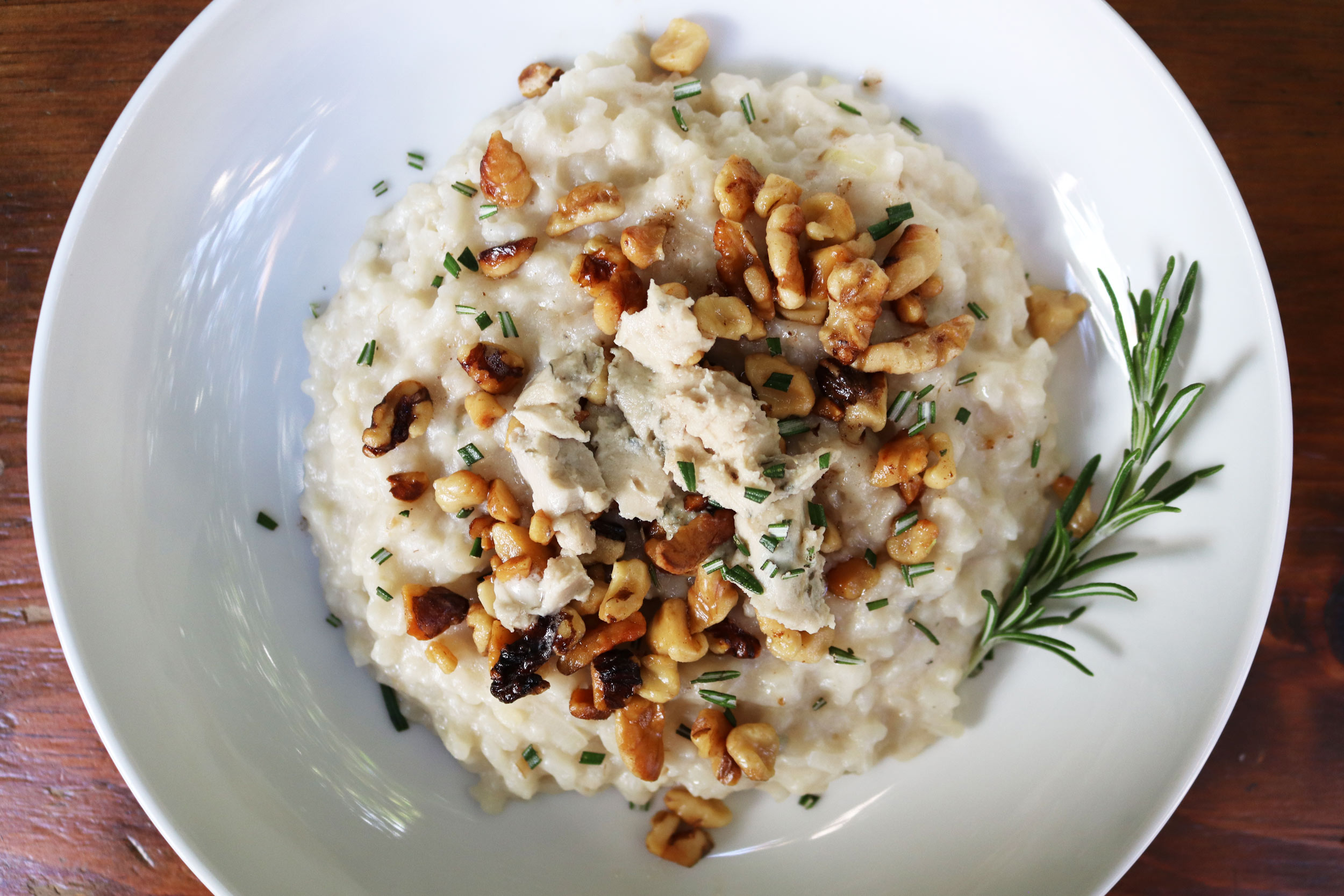