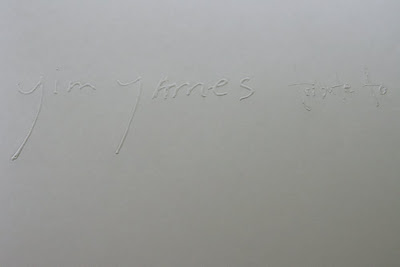 We’ve been on a bit of a record kick lately. Like, actual records—those giant vinyl disks. The whole slow shift to non-tangible, electronic files of music that we never get to hold or open, that don’t allow us to read along with the lyrics or marvel at the intricate cover art that’s larger than 200px x 200px—that movement’s gotten us down over the past years. Yes, it’s wildly convenient to hold your entire record collection in your pocket, but it also robs SO much from the overall sensory experience of music too. I realize I’m not alone in this and that it’s a wholly un-original thought, but that actually works to my advantage in this case as it seems many labels and artists and people behind creating music are catching on to this too. With labels like Sub Pop providing download codes for almost all of their vinyl releases and many other independent labels following suit, it’s becoming easier and easier to have your cake and eat it too. You get the nice, weighty, substantive representation of the artist and his or her music along with the much more real experience of playing the record itself, with all it’s warm crackles and depth of sound. You can’t just hit play and start listening to what would eventually be a string of, say, 6,770 songs. You have to realize when one side of the record is done and go over and flip the record in order to enjoy the rest of it. It seems minor, but it goes a long way to putting you in the moment. And then, on top of the nice record, and big beautiful art, you’ve got the MP3s to put on your iPod or whathaveyou (I swear I’ve seen people with these other, non-iPod things). It’s win-win, really. There was actually a great piece on vinyl on last week’s Soundcheck on NPR, if you’re interested.

Anyway, what this gets us to is one of our most recent and most rewarding vinyl purchases: That of Yim Yames’ “Tribute To”. Yim Yames is the somewhat silly-sounding moniker under which Jim James, front man of the band, My Morning Jacket, chose to record solo. I’ve always liked My Morning Jacket, even more so with the last record where they seem to really be getting comfortable in their own collective skin, but I’ve never been a huge fan or anything. But there were two intriguing things about this record that reeled me in: First, the EP is a tribute to the life of George Harrison that James recorded a few days after the ex-Beatle’s death in 2001, locking himself in the bathroom of an old farm in his native Louisville, KY to lay down the tracks. Second, part of the proceeds of the record are going to Woodstock Farm Animal Sanctuary in upstate New York, a little farm sanctuary in upstate New York with a big heart that we absolutely love.
Knowing that James recorded these songs stowed away in a little room on a farm so soon after Harrison’s death makes them even more moving. You can hear the loneliness and heartfelt sentiment in James’ voice and it saturates the songs in the most beautiful of ways, especially in “All Things Must Pass.” I challenge you to read a biography about George Harrison while listening to that song and not cry. For serious.
The EP itself is a total of six songs, four of which are covers from Harrison’s post-breakup album, “All Things Must Pass,” the remaining two being the George songs from the Beatles’ catalog, “Long, Long, Long” and “Love You To.” Every one of these songs is truly superb on its own, but there is absolutely nothing like just putting this record on and listening to it from side to side with your friends and/or loved ones. Record night, ya’ll! Highly, highly recommended. Especially in this case. The limited edition vinyl for “Tribute To”, which, in addition to being pressed on awesome, heavy-weight 180 gram vinyl (why’s that cool?) and being packaged in a beautifully pressed sleeve (check out the embossed owl below), comes with a CD of the entire record. So easy iPoding. Or faux-iPoding. 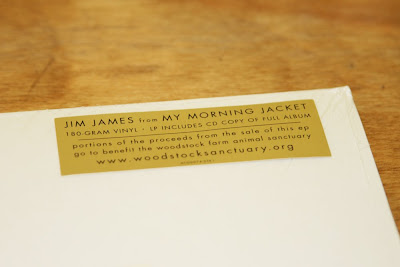 As for the nod to Woodstock Farm Animal Sanctuary, it all came about after a chance meeting at restaurant in Louisville, KY, which, it turns out, acts as the hometown for both James and WFAS founder and superstar, Jenny Brown. Brown approached James, an ethical vegetarian, about doing a benefit for the farm and, with the 40th anniversary of the original Woodstock concert hitting this year and knowing George’s love of animals, James thought unearthing this recording and finally releasing it for such a worthy cause made sense. We have to say, we whole-heartedly agree. Preview the tracks here.
To order the record, visit Jim’s site. If your order the vinyl from there, not only does it come with a CD, you get a Woodstock FAS shirt too. So, holla! For those of you in NYC, Other Music (15 E 4th Street off of Broadway in Manhattan) also has a number of the records. And find out more about Jenny and husband, Doug’s work at Woodstock here. I challenge you to read about any of those touching success stories while listening to this record and not totally bawl too, man. Finally, you HAVE to read this article on Jenny and amputee goat, Albee, from the Times if you haven’t already. Apologies for all the reading assignments, but it’s summer, right? You shouldn’t even be working.
Ya’ll have a great week. 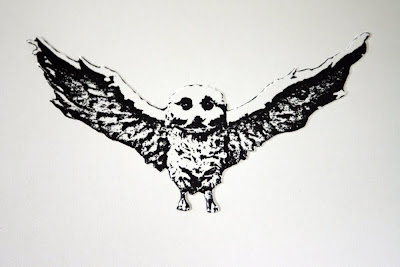